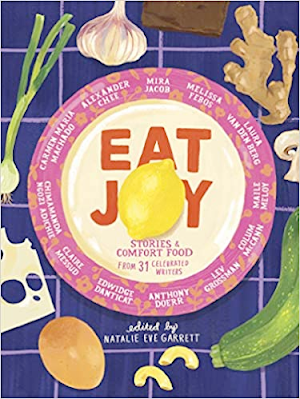 Let's face it, this year has required a lot of comfort to get through. I have sought my comfort in my usual two places, in books and in the kitchen, so in carrying on with that theme as we end 2020 and enter 2021, I am picking Eat Joy: Stories & Comfort Food from 31 Celebrated Writers as our December/January book pick. Just the cover sparks joy in me and I like the idea of diving into short essays about food.
From the Publisher:

This collection of intimate, illustrated essays by some of America’s most well-regarded literary writers explores how comfort food can help us cope with dark times—be it the loss of a parent, the loneliness of a move, or the pain of heartache.

Lev Grossman explains how he survived on “sweet, sour, spicy, salty, unabashedly gluey” General Tso’s tofu after his divorce. Carmen Maria Machado describes her growing pains as she learned to feed and care for herself during her twenties. Claire Messud tries to understand how her mother gave up dreams of being a lawyer to make “a dressed salad of tiny shrimp and avocado, followed by prune-stuffed pork tenderloin.” What makes each tale so moving is not only the deeply personal revelations from celebrated writers, but also the compassion and healing behind the story: the taste of hope.

There are recipes included with the essays or maybe it will inspire us to make the food that most comforts us!

Deadline for contributing your post is Sunday, January 31, 2021
For the February / March edition, Claudia (Honey from Rock) chose Where I Come From: Life Lessons from a Latino Chef by Aaron Sanchez (published October 2019) 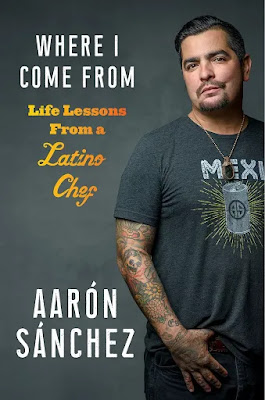 I am going for a memoir by this Latino chef, and the food he brings to it, based on very good reviews, since I haven't had a chance to read it yet, plus the fact that we haven't done Mexican at Cook the Books yet, to my knowledge, and that it's one of my favorite cuisines.
From the Publisher:

America's most prominent Latino chef shares the story behind his food, his family, and his professional journey.  Before Chef Aaron Sanchez rose to fame on shows like MasterChef and Chopped, he was a restless Mexican-American son, raised by a fiercely determined and talented woman who was a successful chef and restaurateur in her own right--she is credited with bringing Mexican cuisine to the New York City dining scene. In many ways, Sanchez, who lost his father at a young age, was destined to follow in his mother Zarela's footsteps...
In this memoir, Sanchez delves into his formative years with remarkable candor... revealing how he fell in love with cooking and started a career in the fast-paced culinary world. Sanchez shares the invaluable lessons he learned from his upbringing and his training... and offers an intimate look into the chaotic and untraditional life of a professional chef and television personality.

From the Library Journal:

In addition, the book contains several delicious recipes, including one for seafood étouffée. VERDICT Highly recommended for foodies and memoir aficionados.

Aloha,
Claudia
Deadline for contributing your post is Wednesday, March 31, 2021
For the April / May edition, Debra (Eliot's Eats) has chosen the novel Honeysuckle Season by Mary Ellen Taylor (September 2020) 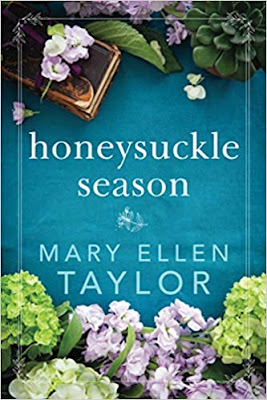 The book tells the tales of four women.
The place setting is a large estate in rural Virginia and the surrounding community. The time setting alternates between the 1940s and today.
These four women's lives are intertwined with a shared history that will be revealed. Besides revolving around these connections, the plot also deals with class stigma, the plight of the poor (especially women), eugenics and certain prejudices in the rural South in the 1940s.
There's plenty of food in the novel of the comforting, downhome kind and the author provides a few recipes at the end:  Buttermilk Pie, Honeysuckle Syrup, and Lemon Cake. This was a quick and enjoyable read. (It's free if you have Kindle Unlimited and only $4.99 to purchase the ebook. I usually don't rate my "free" Kindle books high but this was a five star review.).


Deadline for contributing your post is Monday, May 31, 2021
To round up the list of selections, for the June / July edition Simona (briciole) picked 97 Orchard: An Edible History of Five Immigrant Families in One New York Tenement by Jane Ziegelman 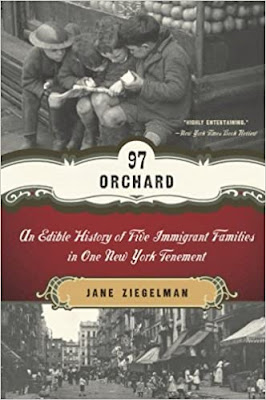 Among the proposals on our blog's Suggested Reading page, I found this title quite appealing [Thank you, Lynda!] and decided to add to our club's selections providing a historical perspective on the foods we bring on our table.
From Publisher's Weekly

Ziegelman puts a historical spin to the notion that you are what you eat by looking at five immigrant families from what she calls the "elemental perspective of the foods they ate." They are German, Italian, Irish, and Jewish (both Orthodox and Reform) from Russia and Germany—they are new Americans, and each family, sometime between 1863 and 1935, lived on Manhattan’s Lower East Side. Each represents the predicaments faced in adapting the food traditions it knew to the country it adopted. From census data, newspaper accounts, sociological studies, and cookbooks of the time, Ziegelman vividly renders a proud, diverse community learning to be American. She describes the funk of fermenting sauerkraut, the bounty of a pushcart market, the culinary versatility of a potato, as well as such treats as hamburger, spaghetti, and lager beer. Beyond the foodstuffs and recipes of the time, however, are the mores, histories, and identities that food evokes. Through food, the author records the immigrants’ struggle to reinterpret themselves in an American context and their reciprocal impact on American culture at large.

Deadline for contributing your post: Saturday, July 31, 2021.
Remember that membership in our book club is open to anyone and we hope you will join us by reading these selections and creating inspired recipes. For more information about participating, click here. 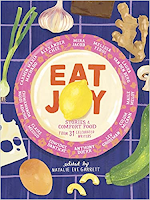 February / March 2021: Where I Come From by Aaron Sanchez (hosted by Claudia at Honey from Rock)

Looks like a great round. A cookbook, a memoir, fiction, and non-fiction. Something for everyone!

Looking forward to spending the next year with you lovely ladies. 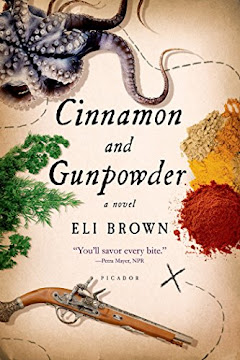