December/January Selection: The Language of Flowers 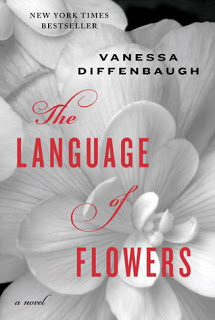 In The Language of Flowers, Vanessa Diffenbaugh tells the tale of Victoria Jones, someone who has had to work at surviving.

The Victorian language of flowers was used to convey romantic expressions: honeysuckle for devotion, asters for patience, and red roses for love. But for Victoria Jones, it’s been more useful in communicating mistrust and solitude. After a childhood spent in the foster-care system, she is unable to get close to anybody, and her only connection to the world is through flowers and their meanings. Now eighteen and emancipated from the system with nowhere to go, Victoria realizes she has a gift for helping others through the flowers she chooses for them. But an unexpected encounter with a mysterious stranger has her questioning what’s been missing in her life. And when she’s forced to confront a painful secret from her past, she must decide whether it’s worth risking everything for a second chance at happiness.

Vanessa Diffenbaugh was born and raised in northern California. After studying creative writing, she went on to teach art and technology to youth in low-income communities. She and her husband PK have four children: Donovan, Tre'von, Graciela and Miles. Vanessa is also the co-founder of Camellia Network, whose mission is to create a nationwide movement to support youth transitioning from foster care. She and and her family live in Monterey, California.
The Language of Flowers, her first novel, was published in over forty countries, and was a Sunday Times Top Ten bestseller in the UK. 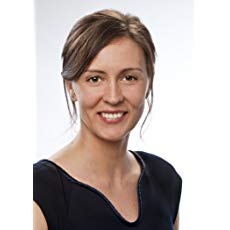 The amount of food in this novel is staggering.  Truly.  As you read, you'll notice that the "mysterious stranger" is quite the baker.  If you're like me, you will find that you are keeping two lists:  one of the food mentioned and one for the meaning of flowers.

The deadline for this round of Cook the Books is January 31, 2020.  I can't wait to see what everyone cooks up.  Leave a comment here with a link to your post or email me at eliotseats@gmail.com.

Participating in Cook the Books is simple.  Pick up a copy of the selection from your local bookstore or library, then cook and post your inspired-by dish. We love to have new members read and cook along with us.  Everyone is welcome!!!   Be sure to check out our Guidelines page if you have any questions (or leave a comment here).

The Temporary Bride: The Roundup 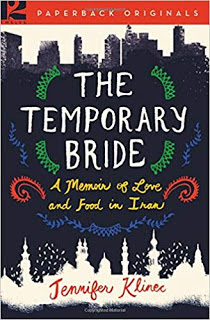 It's that time again here at Cook The Books Club - The Roundup! And what a great assortment of dishes were brought to our table.  It truly makes me wish this were a real gathering, of you all, around an actual table, and not just digital.  I wanted to taste everything!

Klinec's memoir gave us plenty of cooking inspiration, if not actual recipes, but since all of us are more than able to get food ideas from almost everything we read, it was pretty much a breeze.  And, I think we all learned something about what it would be like to actually live in present day Iran.  Only for the brave.  Which explains why so many want to leave the place. We actually have lots to be thankful for, and I do hope you all had a wonderful Thanksgiving with family and or friends!

So, without further ado or digression, here are the contributions that were sent in for this virtual banquet!  If I have inadvertently missed anyone, please let me know. 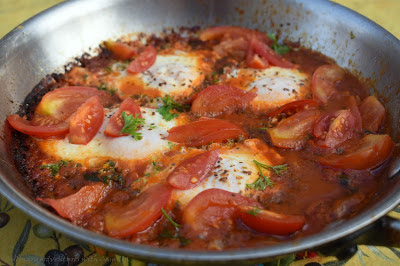 First in, very early actually, on October 1st, was Camilla of Culinary Adventures with Camilla, with a pan of savory tomatoes and eggs, the spicy Iranian version of shakshuka, called Omlet-e Gojeh Farangi, which looks stunning, and is totally tempting me to re-create it soon.

Camilla says though she's read countless memoirs, "I have never read one and thought to myself: I'd like to do that. I even told Jake that I had a retirement plan. I think I'd like to run a cooking school out of our home. Okay, I am not sure how practical that would be...or what sorts of licensing, etc., I would need. But Klinec's cooking school intrigues me."  Camilla added that she "thoroughly enjoyed The Temporary Bride and will definitely read more books by Klinec. And, if cooking school ends up being my retirement plan, I'll let you know." 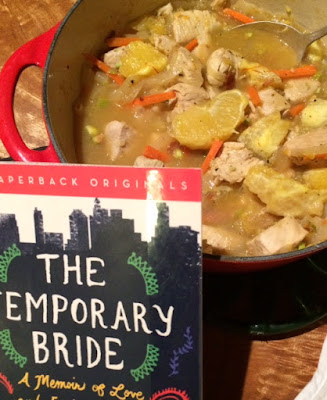 I, Claudia of Honey from Rock, was also unusually prompt this go round, with a dish of Orange Chicken Koresh, a bit on the complicated side, but worth the extra effort.  For the recipe itself, luckily, I had the perfect cookbook, The Silk Road Gourmet, by Laura Kelley, an earlier Cook the Books Club selection,

I thought this memoir was "A truly fascinating read. I especially enjoyed the account of Klinec's very unusual growing up years, which went a long way toward explaining her extreme courage and independence. Also the cooking school she ran in London sounded like my kind of fantasy class to take."  Though her book was "Probably more of the struggling love story and less of the actual cooking than I would have liked, but still quite the adventure, and enough food mentions to get inspired by." 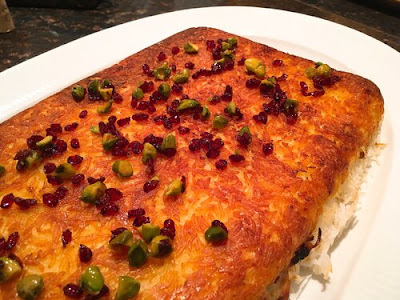 Next, new-comer, Elizabeth of Culinursa, brought a very enticing looking Tahcheen-e Morgh, a Baked Saffron Yogurt Rice with Chicken dish to our online table. She mentioned that as there are no recipes in the book, "I feel fortunate that I own Bottom of the Pot by Naz Deravian, who left Iran with her family in 1979 when she was 8 years old." So she was able to find this authentic recipe.

Elizabeth says this about the book: "Among the many wonderful parts of Klinec’s memoir, the most meaningful for me was how she brings her reader right into an average Iranian family kitchen. It’s a difficult balance, though. We gain a view into a culture, a society, that relegates women to a very narrowly defined paradigm, and reading about that bristles, as does the rigidity of the society, and the strictures placed on citizens by the government for men and women alike, so antithetical to freedoms we take for granted. And yet even in such an environment, people live and love and eat, and through this, Klinec makes sure we see their humanity." 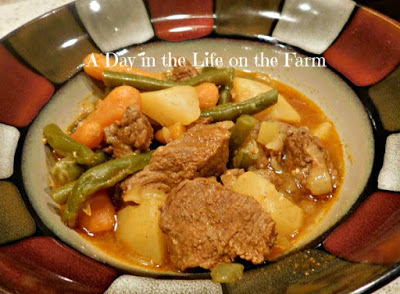 Next, Wendy, of A Day in the Life on the Farm, arrived with a some true comfort food,  Khorake-Loobia-Sabz, or Green Bean Stew, which she updated by using her Instant Pot. Wendy first had this dish in a restaurant, before even reading the book, so when we picked an Iranian memoir, knew ahead what she wanted to make. After a bit of  research she able to recreate Loobia at home.

As far as her take on the memoir, she noted; "This was disappointing to me because I really was hoping for more information on the food and what I got was a lesson about how to get through all the red tape and become a Temporary Bride so you can have sex in Iran without being killed for doing so." 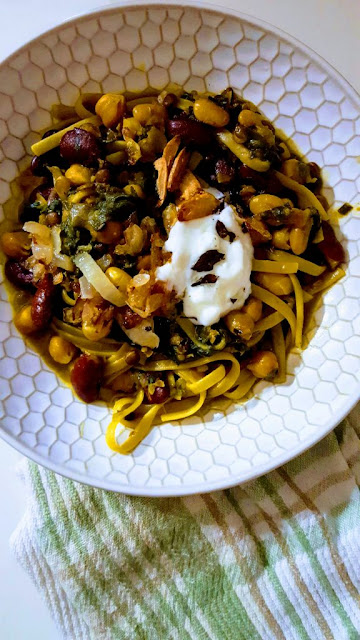 Next up, Debra of Eliot's Eats brought a tempting pot of Ash-e Reshteh, a Persian Noodle Soup to the table. Something all of us will appreciate in this cooler weather.  She found the recipe by Googling "Persian food" online.

Debra says "I was intrigued by Klinec from the beginning of this memoir. Klinec comes from a hard working immigrant family that settles in Canada. Klinec is driven and fearless and maintains that hard working spirit. I was really rooting for her as she sets off on her cooking school adventure. I was still cheering her on as she trekked to exotic places in search of exotic recipes. I still found her fearlessness intriguing as she travels to Iran but I began to become fearful for her... I did still enjoy the book and her story, but I guess I lost a bit of respect for her as she pursued the temporary bride tradition." 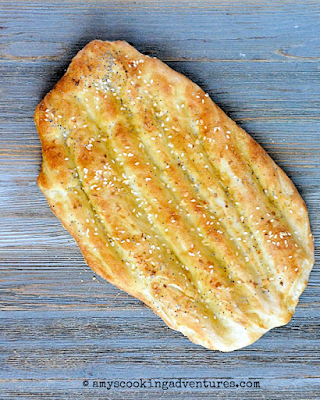 And, to go with everything else on the banquet table, Amy of Amy's Cooking Adventures, brought us some  scrumptious sounding, and looking, Nan-e Barbari, a Persian flatbread.  Boy!  I want some right now!

Amy says about the memoir that she's "not completely clear why Klinec chose to go to Iran when she needed a break from her totally awesome (yet exhausting) job teaching cooking classes (very successfully) out of her home, after leaving her other successful corporate career."  I think a lot of us were unclear about that move. But, it did give us some exotic cooking inspiration. 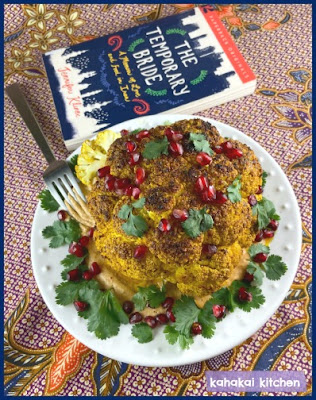 Next to last Deb, my fellow Hawaiian CTB co-host, from Kahakai Kitchen, brought Whole Roasted Cauliflower with Warm Harissa Hummus, to our banquet, which I'm thinking would be perfect with that bread of Amy's, and what a beautiful and festive looking dish it is!  Deb noted that: "Since I love Persian food and a good foodie memoir, this book was a hit with me..."

She said, "I look at Klinec with admiration for her courage but shake my head a bit at the chances she took with Vahid--even after receiving a "temporary marriage" status. I guess you can't help loving who you love, but as for me I'll stick to armchair travel to Iran." 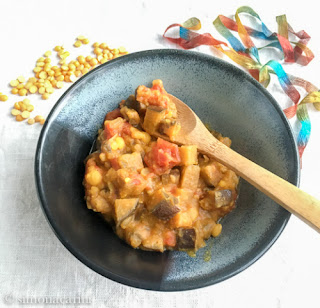 Arriving last for the dinner party was Simona of Briciole, bringing an Eggplant and Yellow Split Pea Stew. With all those lovely spices and fresh vegetables I'm sure it's delicious.  She notes: "While traditional Persian dishes feature in the book, there are no recipes. So, I did some reading, focusing on eggplant, a favorite vegetable that I can still find at the farmers' market here. I also wanted a vegetarian dish, so ended up on a vegetarian version of Khoresht gheymeh bademjan, a stew of split peas (gheymeh) and eggplant (bademjan)."

Simona says I "found the first part of the story more interesting. Once Klinec arrives in Iran, the book could not hold my attention."

And that's it!  So many different takes on the book itself.  Altogether though, I think we had a very representative selection of Persian dishes, for a fabulous virtual feast!  Be sure to visit everyone to check out their recipes and reviews.  Thanks to all of you for participating

I hope you will all join us for the CTB December/January pick, The Language of Flowers by Vanessa Diffenbaugh and hosted by Debra of Eliot's Eats.  Her announcement will be posted soon.