Just in time for the Holidays, here are the next four selections of our book club: 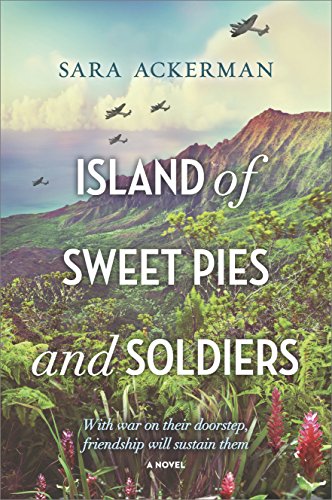 I have long wanted to host a Hawaii-set book for Cook the Books and so I’m excited to pick this historical fiction set during WWII on the Big Island.

Hawaii, 1944. The Pacific battles of World War II continue to threaten American soil, and on the home front, the bonds of friendship and the strength of love are tested.

Violet Iverson and her young daughter, Ella, are piecing their lives together one year after the disappearance of her husband. As rumors swirl and questions about his loyalties surface, Violet believes Ella knows something. But Ella is stubbornly silent. Something—or someone—has scared her. And with the island overrun by troops training for a secret mission, tension and suspicion between neighbors is rising.

Violet bands together with her close friends to get through the difficult days. To support themselves, they open a pie stand near the military base, offering the soldiers a little homemade comfort. Try as she might, Violet can’t ignore her attraction to the brash marine who comes to her aid when the women are accused of spying. Desperate to discover the truth behind what happened to her husband, while keeping her friends and daughter safe, Violet is torn by guilt, fear and longing as she faces losing everything. Again.

Author Sara Ackerman was born and raised in Hawaii and studied journalism, earning graduate degrees in psychology and Oriental medicine. When she's not writing or practicing acupuncture, you'll find her in the mountains or in the ocean. Here are links to her website and to her Instagram account where she posts lovely photos of Hawaii and books.

Deadline for contributing your post is Thursday, January 31, 2019
For the February/March edition, Claudia (Honey from Rock) chose Crazy Rich Asians by Kevin Kwan 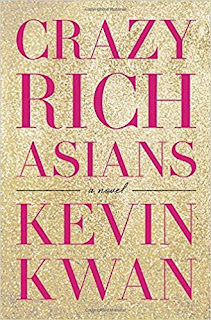 As I am currently at number 184 on the library list, and have no personal reportage to present, we will go with clips from the Publisher Weekly Review and the NY Times. Needless to say, the novel has plenty of people eating interesting food.


Kwan's debut novel is a fun, over-the-top romp through the unbelievable world of the Asian jet set, where anything from this season is already passe and one's pedigree is everything. When Rachel Chu's boyfriend, Nick Young, invites her home to Singapore for the summer, she doesn't realize how much gossip she's generated among Asian socialites around the world. To Rachel, Nick is a sweet, intelligent history professor-and the first man she's imagined marrying. To the Asian billionaire set, he's the gorgeous heir apparent to one of China's most "staggeringly rich" and well-established families who virtually control the country's commerce with their ancient fortunes. As soon as she steps off the plane, Rachel is ushered into the opulent world of castle-like estates and mind-boggling luxury. As if the shock of realizing the scale of Nick's wealth is not enough, she must also contend with a troupe of cruel socialites who would absolutely die before they let Singapore's most eligible bachelor get snapped up by a no-name "ABC" (American-born Chinese). There is also Nick's family: his imposing mother, Eleanor, who has exact ideas about who Nick should be dating; his beautiful cousin Astrid, who the younger girls dub "the Goddess" for her stunning fashion sense (she was "the first to pair a vintage Saint Laurent Le Smoking jacket with three-dollar batik shorts"); and Nick's cousin, the flamboyant Oliver, who helps Rachel navigate this strange new world. A witty tongue-in-cheek frolic about what it means to be from really old money and what it's like to be crazy rich.

From the NY Times:


Mr. Kwan knows how to deliver guilty pleasures. He keeps the repartee nicely outrageous, the excess wretched and the details wickedly delectable. Who knew that an Asian menu might boast of “Giant South Sea Scallop Consommé With Washington State Ginseng Vapors and Black Mushrooms?” (“Go figure,” writes Mr. Kwan, in a footnote about why the ginseng is imported.) Who knew that an Asian socialite might include Save the Shahtoosh among her favored fashionable causes?

This should be a fun and food inspiring selection.

Deadline for contributing your post is Sunday, March 31, 2019
For the April/May edition, Debra (Eliot's Eats) has chosen Buttermilk Graffiti by Edward Lee 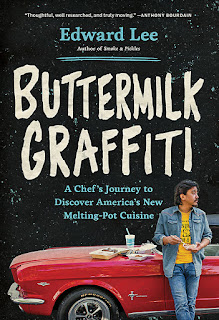 Buttermilk Graffiti by Edward Lee is a good companion piece coming off our reading of The Cooking Gene by Michael Twitty. Lee not only traces his own food comforts and influences, but also all Americans as he travels the country looking for a national cuisine — ”that tension between two vastly different cultures creates something new” (Kindle location 129). Even the title talks about the melding of Edward:

Edward Lee is the author of Smoke & Pickles and Buttermilk Graffiti. He is the chef/owner/culinary director of numerous restaurants in Kentucky, Maryland, and D.C.. I first became aware of Lee through his role in the Emmy Award-winning series The Mind of a Chef. Fermented, a feature-length documentary is another recent project (2017). He splits his time between Louisville, KY and Washington, DC.

Deadline for contributing your post is Friday, May 31, 2019
To round up the list of selections, for the June / July edition Simona (briciole) picked Blood, Bones & Butter by Gabrielle Hamilton 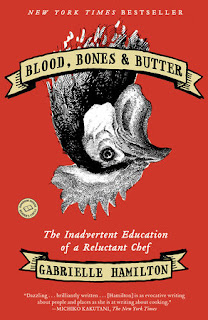 This book was suggested to me recently and I am excited to read it with you all and see how the reading inspires us.

Before Gabrielle Hamilton opened her acclaimed New York restaurant Prune, she spent twenty hard-living years trying to find purpose and meaning in her life. Blood, Bones & Butter follows an unconventional journey through the many kitchens Hamilton has inhabited through the years: the rural kitchen of her childhood, where her adored mother stood over the six-burner with an oily wooden spoon in hand; the kitchens of France, Greece, and Turkey, where she was often fed by complete strangers and learned the essence of hospitality; Hamilton’s own kitchen at Prune, with its many unexpected challenges; and the kitchen of her Italian mother-in-law, who serves as the link between Hamilton’s idyllic past and her own future family—the result of a prickly marriage that nonetheless yields lasting dividends. By turns epic and intimate, Gabrielle Hamilton’s story is told with uncommon honesty, grit, humor, and passion.

Deadline for contributing your post: Wednesday, July 31, 2019.
Remember that membership in our book club is open to anyone and we hope you will join us by reading these selections and creating inspired recipes.  For more information about participating, click here.

As always, specific announcement posts can be found at Cook the Books as the current year ends and the new one marches on.

December/January: Island of Sweet Pies and Soldiers by Sara Ackerman (hosted by Deb at Kahakai Kitchen)