Our August/September Selection: Midnight at the Blackbird Cafe by Heather Webber

Can you believe it's almost fall? We have cycled around again here at Cook the Books Club and I am kicking off our next four selections with a novel, Midnight at the Blackbird Cafe by Heather Webber. 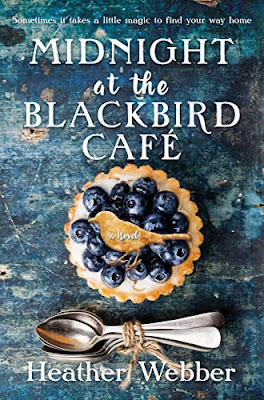 I chose this book as it has been languishing on my TBR stack for a couple of years now and I really wanted a push to read it. That push is sharing it with you!
From the Publisher:

Nestled in the mountain shadows of Alabama lies the little town of Wicklow. It is here that Anna Kate has returned to bury her beloved Granny Zee, owner of the Blackbird Café.

It was supposed to be a quick trip to close the café and settle her grandmother’s estate, but despite her best intentions to avoid forming ties or even getting to know her father’s side of the family, Anna Kate finds herself inexplicably drawn to the quirky Southern town her mother ran away from so many years ago, and the mysterious blackbird pie everybody can’t stop talking about.

As the truth about her past slowly becomes clear, Anna Kate will need to decide if this lone blackbird will finally be able to take her broken wings and fly.

I'm in the mood for something sweet and I'm always in the mood for pie, although it seems like there is other southern food inspiration to be found in the pages too. I look forward to seeing how it inspires us in the kitchen!

The deadline for contributing your post is Thursday, September 30, 2021

As always, Cook the Books is open to anyone. Just pick up the latest selection, read it, and get inspired. Then whip up a dish sparked by your reading and post during by the deadline. For more information and guidelines, click here. 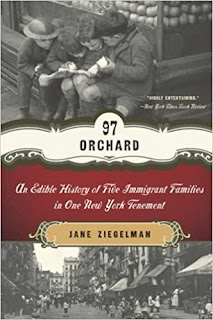 It's time for the roundup of Cook the Books' Club June-July 2021 edition for which we read 97 Orchard, An Edible History of the Immigrant Families in One New York Tenement by Jane Ziegelman, a historical nonfiction that explores the culinary life of New York's Lower East Side around the turn of the twentieth century through the experiences of five families, all of them residents of 97 Orchard Street.
As I've done in the past, I will present our club members' contributions as a menu, with the dishes in each section ordered alphabetically. For each, I will give you the official information (author, blog name and post title) and a quote from it — a taste: follow the link and read the author's take of the book and how the reading inspired the cooking. 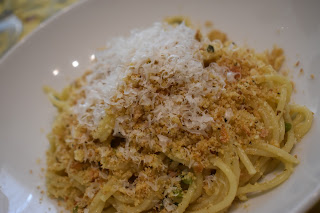 Camilla of Culinary Adventures with Camilla prepared Spaghetti aglio e olio
"It's an interesting way to chronicle immigrant stories-from the basic perspective of how they nourished themselves. And, as she writes, the kitchen was the center of many, many activities. 'A place to cook and to eat, the kitchen was also used as a family workspace, a sweatshop, a laundry room, a place to wash one’s body, a nursery for the babies, and a bedroom for boarders.'... Initially, I was inspired by this passage about snails... but in the end, I decided to make spaghetti con aglio e olio because I had all of the ingredients in my cabinet and didn't have snails!" 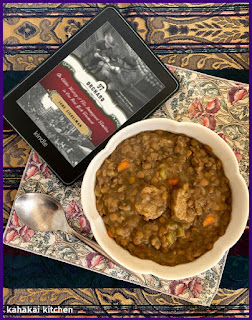 Deb of Kahakai Kitchen prepared Vegan Lentil & Sausage Soup
"I love food history and knowing where the different dishes I grew up with in America had their origins. Ziegelman does a good balance of storytelling and details that makes the book entertaining... There were several dishes and recipes I thought would be fun to make for the book but I ended up with the Lentil Soup recipe from Chapter 3 from the German-Jewish perspective... 97 Orchard says: In accordance with family tradition, lentil soup was known as 'hiding soup in the Nussbaum' kitchen, a reference to the way the sausage tended to hide among the lentils." 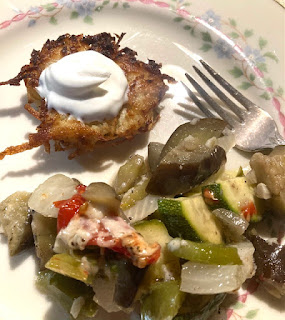 
"Lots of amazing information, things I never knew about our immigrant forebears, their lives and times... those folks were industrious, inventive and struggling to survive, frequently in the face of cruel discrimination.. This book is about so much more than the food, covering as it does the lives of the immigrants as a whole... Bob remembers his mother making latkes, so in honor of that heritage, I am doing a Hawaiian version.  The daikon root a nod to our local Korean immigrants... I thought it would add a nice touch of tang to the classic latkes." 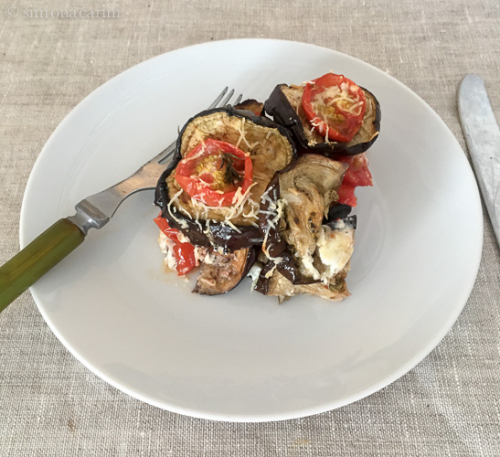 
"A good part of the book's appeal is due to the fact that I am an immigrant myself... Some of the themes covered were known to me, like: 'More than other groups, Italians arrived in this country with the firm knowledge that they were unwanted.'... The chapter about Italian immigrants talks about a number of foods, including tomatoes and eggplant... Probably the most famous Italian dish made with those two ingredients is parmigiana di melanzane... For years I have been making a dish inspired by the rich parmigiana and here I am sharing the recipe." 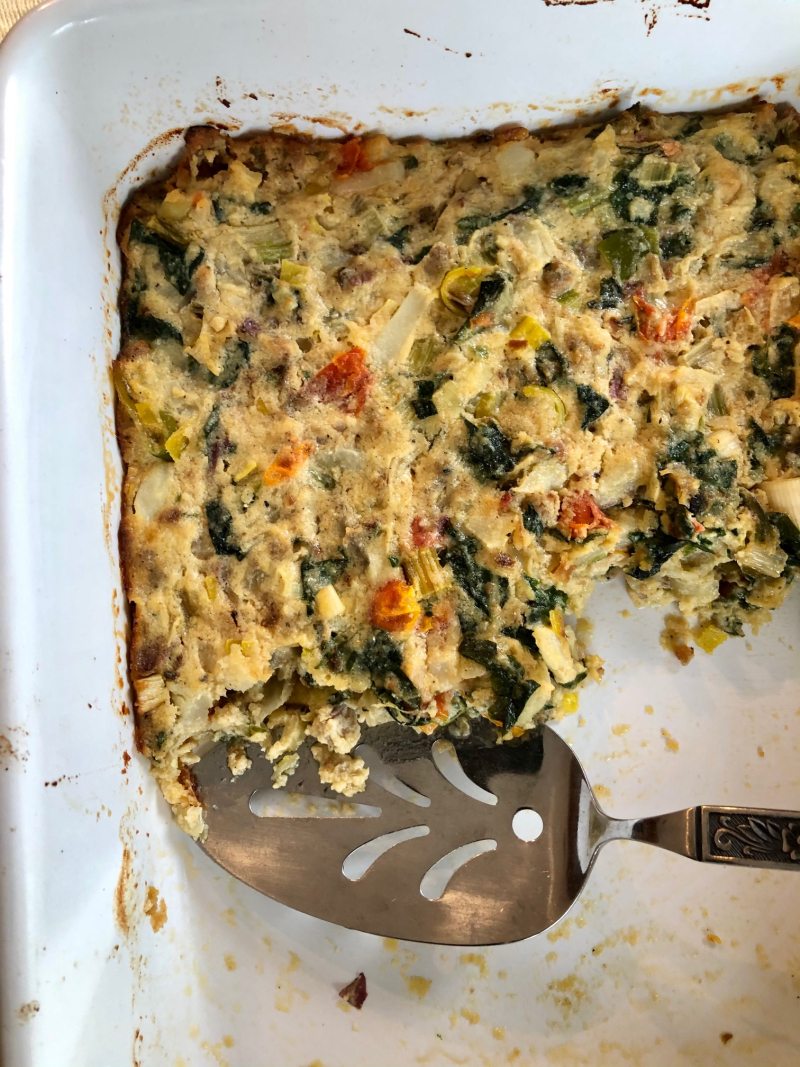 Cathy of Delaware Girl Eats prepared Timballo di zucchini
"The passage that really resonated with me was 'No people are more devoted to their native food than Italians and Italian groceries are filled with imported edibles that flourish in the different colonies of the Americas... The prices of the imported goods is a drain on the purses of the patrons and they wearily try to get the same satisfaction from American-made substitutes, which have the same name and appearance but never the same taste'. The dish that inspired me... is zucchini-based... I chose one more familiar to our Abruzzo region from a book by Ada Boni." 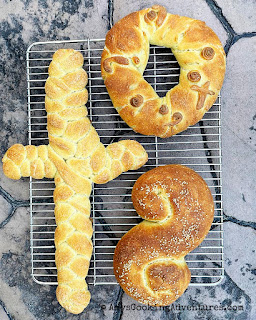 Amy of Amy's Cooking Adventures baked Sicilian Bread
"Many vintage recipes were included in the book.  And while I thought I would try my hand at one of those, I found I was most inspired by a paragraph long mention of Sicilian Bread.  I was inspired because the bread was described as different breads representing the Saints.  Since I’m Catholic, I loved the idea of honoring the saints and set out to research Sicilian Bread... The final shape was a braided bread, in the shape of a cross.  This was by far the favorite in my house (followed by the St. Joseph bread)." 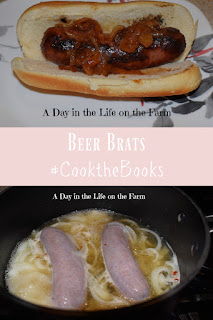 Wendy of A Day in the Life on the Farm prepared Beer Brats
"97 Orchard was a housing tenement in New York built by the Glockner family who emigrated to the USA from Germany.  Mr Glockner started the tenement advancing from Tailor to Gentleman. So in honor of the Glockners, who were the first residents of 97 Orchard, I am serving up Brats in Beer... Maybe if I had not built up this book in my mind as to what I thought it was going to be I could have enjoyed it more.  I don't know and I will never know.  What I do know is that the Germans who emigrated to the USA brought with them Sausages and Beer.  Now, there is something that I can get excited about!!" 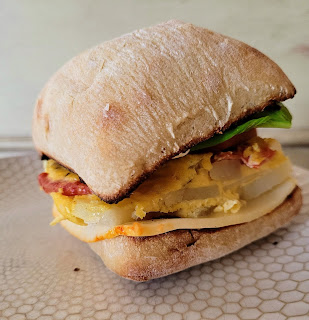 
"The most interesting part of the book was the description of the Ellis Island cafeteria. My ignorance of the immigrant experience became evident as I read about the feeding of thousands, fresh off the boat. I had no idea that the ship companies paid to feed the immigrants on Ellis Island and that they were fed so abundantly... Throughout, I noticed the part potatoes played in almost every culture mentioned.  Potatoes were a long lasting commodity and could be relied upon to keep families from starvation, not only on the journey to America but also during their initial settlement."
A great Thank you! to everyone who joined in this edition of Cook the Books.


And now, I’ll turn things over to Deb of Kahakai Kitchen who is hosting the August-September edition in which we are reading the novel Midnight at the Blackbird Cafe by Heather Webber. 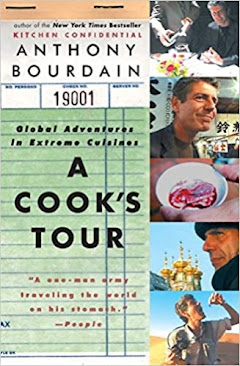