Deb (Kahakai Kitchen) opens the series with The Food Explorer:The True Adventures of the Globe-Trotting Botanist Who Transformed What America Eats by Daniel Stone (published February 2018) for the August/September 2019 edition

I’ll admit that I was the delay in the new book selection posting because I just couldn’t come up with a book I felt that strongly about hosting. Thankfully, Simona had a couple of great suggestions and I got very excited about The Food Explorer. Although I have a brown thumb for growing plants, I find botany incredibly interesting and combining it with the origins of food is even better. I read a sample on Amazon and was sold because there seems to be plenty of action mixed into the history.

In the nineteenth century, American meals were about subsistence, not enjoyment. But as a new century approached, appetites broadened, and David Fairchild, a young botanist with an insatiable lust to explore and experience the world, set out in search of foods that would enrich the American farmer and enchant the American eater.

Kale from Croatia, mangoes from India, and hops from Bavaria. Peaches from China, avocados from Chile, and pomegranates from Malta. Fairchild’s finds weren’t just limited to food: From Egypt he sent back a variety of cotton that revolutionized an industry, and via Japan he introduced the cherry blossom tree, forever brightening America’s capital. Along the way, he was arrested, caught diseases, and bargained with island tribes. But his culinary ambition came during a formative era, and through him, America transformed into the most diverse food system ever created.

I think we'll have fun learning with and cooking with this one!
Aloha,
Deb

Deadline for contributing your post is Monday, September 30, 2019
For the October/November edition, Claudia (Honey from Rock) chose The Temporary Bride - A Memoir of Love and Food in Iran by Jennifer Klinec (published February 2017) 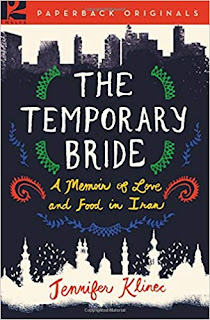 I have't much experience with Persian food, so it should be an adventure, right up our food alley anyway. Here's the Publisher's take on the book:


A true story of forbidden love set against the rich cultural and political backdrop of modern-day Iran.

Jennifer Klinec is fearless. In her thirties, she abandons her bland corporate job to launch a cooking school from her London apartment and travel the world in search of delicious recipes and obscure culinary traditions. Her journey takes her to Iran, where she seeks out a local woman to learn the secrets of Persian cuisine.

Vahid is suspicious of the strange foreigner who turns up in his mother's kitchen. Unused to such a bold and independent woman, he is frustrated to find himself, the prized only son of the house, largely ignored for the first time. But when the two are thrown together on an unexpected adventure, they discover a mutual attraction that draws them irresistibly toward each other--but also pits them against harsh Iranian laws and customs, which soon threaten to tear the unlikely lovers apart.

Getting under the skin of one of the most complex and fascinating nations on earth, The Temporary Bride is a soaring, intricately woven story of being loved, being fed, and struggling to belong.


Deadline for contributing your post is Saturday, November 30, 2019
For the December 2019 / January 2020 edition, Debra (Eliot's Eats) has chosen the novel The Language of Flowers by Vanessa Diffenbaugh (April 2012) 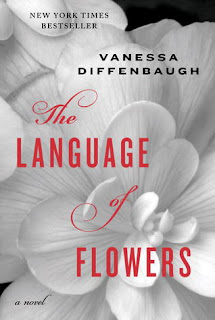 I remember reading this book a few years ago and mentally making notes about all the food in the novel. At that time, I thought The Language of Flowers by Vanessa Diffenbaugh would make a good selection for Cook the Books. For some reason, the novel has languished inside my Kindle.

The novel revolves around the character of Victoria. She's had a sad life and has aged-out of the foster care system. Victoria finds herself homeless and without any job prospects. But, she has the "language of flowers." Her gift lands her a job with a local florist and allows her to reconnect with her past while visiting the flower market.

The Language of Flowers is a cross between White Oleander by Janet Fitch (because of the foster care system depiction) and Garden Spells by Sarah Addison Allen (because of the power of the flowers; however, Victoria's "gift" with the language of flowers is more her education and knowledge versus a mystical talent).

Besides many food references in the novel, you will find an education of the power and language of flowers (hearkening back to Victorian times) within the pages.


Deadline for contributing your post is Friday, January 31, 2020
To round up the list of selections, for the February / March edition Simona (briciole) picked the novel Pomegranate Soup by Marsha Mehran

I saw this book at the annual Berkeley Library sale and as I remember reading good reviews about it, I added it to my purchases. Pomegranate Soup is a story of people who have fled from their country of origin and recreated their lives in a different one. In the case of the three Aminpour sisters, the first country is Iran, the second Ireland. From the kitchen of an old pastry shop in the village of Ballinacroagh, County Mayo, the sisters share foods of their native country, like red lentil soup, abgusht stew, rosewater baklava. Not everybody like the "wafts of cardamom, cinnamon, and saffron float through the streets," though and therefore, as you can imagine, adventures ensue.

As I was preparing for presenting the novel to our Cook the Books Club, I read that Ms. Mehran died in Ireland in 2014, aged 37, while she was working on the third book of the Aminpour sisters' series (the second, Rosewater and Soda Bread, was published in 2008). I am even gladder to feature Pomegranate Soup as our selection: reading what she wrote and shared with the world is, in my view, the best way to honor her memory.

Deadline for contributing your post: Tuesday, March 31, 2020.
Remember that membership in our book club is open to anyone and we hope you will join us by reading these selections and creating inspired recipes. For more information about participating, click here.

August/September: The Food Explorer by Daniel Stone (hosted by Deb at Kahakai Kitchen)

October/November: The Temporary Bride by Jennifer Klinec (hosted by Claudia at Honey from Rock)

December/January: The Language of Flowers by Vanessa Diffenbaugh (hosted by Debra at Eliot's Eats)