If you read my post for the last selection, Cinnamon and Gunpowder, you might remember I found myself in some sort of time warp.   Apologies to Claudia, the host for the last round, because I am still reading that book (and enjoying it).   I just ran out of time.

Imagine my surprise when I also realized that it was time for me to host.  It seems like it was just a couple of moths ago that I chose Midnight Chicken by Ella Risbridger. 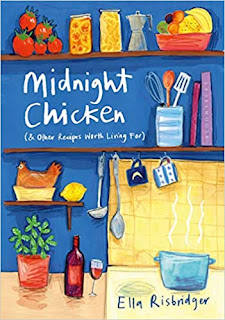 "A manual for living and a declaration of hope." --Nigella LawsonThere are lots of ways to start a story, but this one begins with a chicken.There was a time when, for Ella Risbridger, the world had become overwhelming. Sounds were too loud, colors were too bright, everyone moved too fast. One night she found herself lying on her kitchen floor, wondering if she would ever get up--and it was the thought of a chicken, of roasting it, and of eating it, that got her to her feet and made her want to be alive.Midnight Chicken is a cookbook. Or, at least, you’ll flick through these pages and find recipes so inviting that you will head straight for the kitchen: roast garlic and tomato soup, uplifting chili-lemon spaghetti, charred leek lasagna, squash skillet pie, spicy fish finger sandwiches and burnt-butter brownies. It’s the kind of cooking you can do a little bit drunk, that is probably better if you’ve got a bottle of wine open and a hunk of bread to mop up the sauce.But if you settle down and read it with a cup of tea (or a glass of that wine), you’ll also discover that it’s an annotated list of things worth living for--a manifesto of moments worth living for. This is a cookbook to make you fall in love with the world again.

Ella Risbridger is a writer and editor, mostly found in a pink kitchen in South London. She writes cookbooks, children's books, poems, articles and honestly, a whole bunch of stuff. Midnight Chicken was Sunday Times Book Of The Year 2019, Guild Of Food Writers General Cookbook Of The Year, and an Amazon bestseller in both hardback and paperback. Likes poems, cats and gardens. 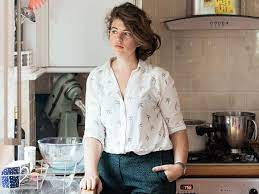 Please note that the recipes are written using British measurements.

As always, I can't wait to see what is whipped up! The deadline for contributing your post is Monday, January 31, 2022.   Please leave a comment below with a link to your post or email me at eliotseats@gmail.com.  For more information, please visit the Guidelines tab.

Cinnamon and Gunpowder - The Roundup 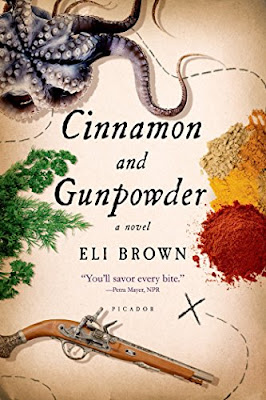 Well, it seems that we've all enjoyed our trip aboard the Flying Rose.  Of course, as usual, some more so than others,  though it was a grand and rip-roaring adventure for sure.  Now get ready for a fabulous Roundup meal to celebrate our safe return!  All hands on deck! 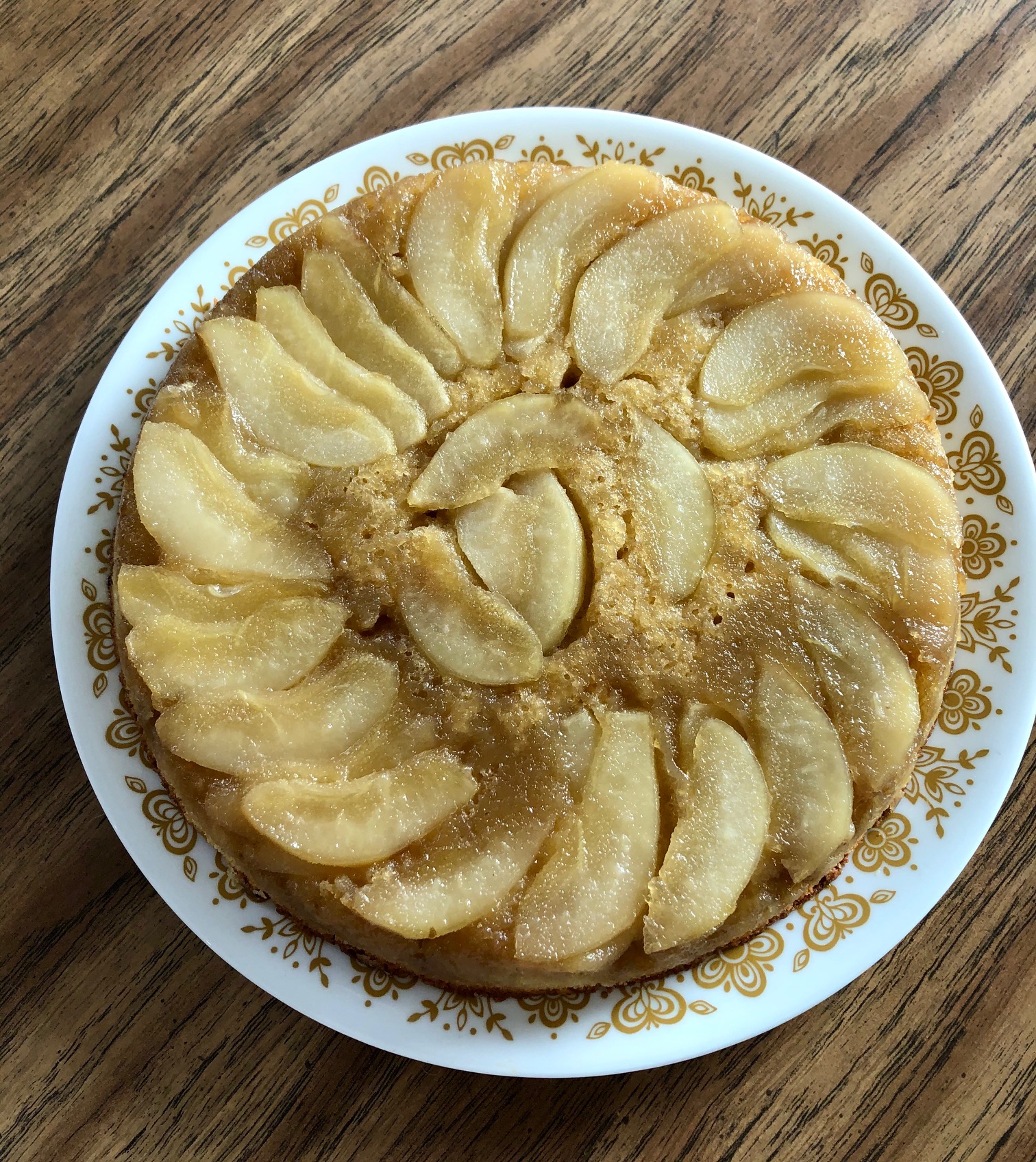 First to arrive was Cathy of Delaware Girl Eats, with a delicious Apple Pie.  I'm partial to having dessert first occasionally myself.  And, this certainly looks like perfection!

She tells us, "I gravitated right away to the pie making described in the book, where the conscripted chef prepared one on board for the pirate ship’s captain, a lively and stern ship‘s master. It was a peach pie in the book, but I took a few liberties, and the narrative connected me to my family’s pie-making history." 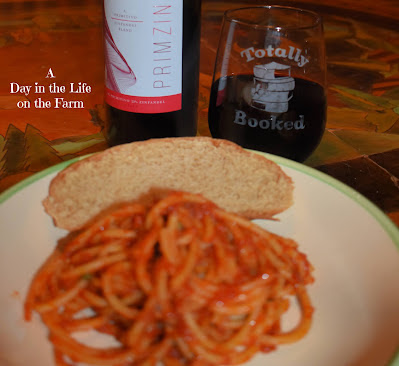 Next, Wendy, of A Day in the Life on the Farm, came in with a fine pot of Pirate Pasta Puttanesca with some fresh sourdough bread for the shipboard party.  She says: "I laughed out loud when (Chef) Wedgewood found some anchovies and decided to make a Puttanesca sauce, remembering the woman who taught him the recipe while he was serving in a monastary and his not being allowed to call it by it's rightful title. You see, puttana translates to whore and rumor had it that this dish was made by prostitutes because it was quick and could be made and eaten between customers."

I don't know what it says about me, but this pasta dish is a favorite and on regular rotation here. 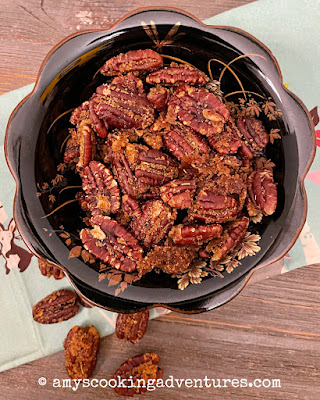 Amy, of Amy's Cooking Adventures, arrived with a sweet and tasty between courses snack, Spiced Candied Pecans to whet our appetites a bit further.  I could scoop those up at any time.
She had this to say: "I was contemplating some sort of cocktail (because pirates), when the very last chapter came in to save me.  Candied walnuts spiced with honey, rosemary, cinnamon, ginger, black pepper, and salt made an appearance. I knew they were meant to be. The walnuts in the book were cooked on a skillet. Since I am not aboard a pirate ship, I added butter and brown sugar to my pecans (because I thought I had walnuts in my pantry, but actually I had pecans) and cooked them in the oven instead." 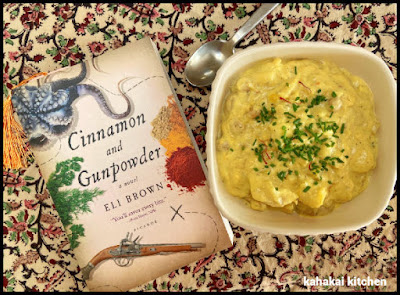 My fellow Hawaiian blogger and CTB hostess, Deb of Kahakai Kitchen, brought a most delicious sounding chowder to the celebration.  Just what the doctor ordered!   A Pirate's Stew of Cod, Potatoes and Garbanzo Beans with Saffron.  Oh boy!  I would like to dig in immediately.
Deb commented that "Pirate stories are usually fun and Cinnamon and Gunpowder is no exception....
It's a relatively quick read and I was surprised at all of the food mentioned. I didn't immediately take a shinning to the overly picky and pious Wedgewood, but I grew to enjoy him, the crew and Captain Mabbot and enjoyed the journey." 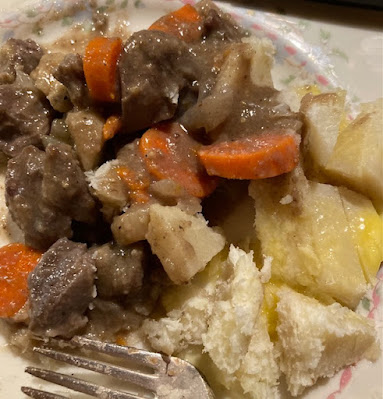 Claudia of Honey from Rock, (moi) was next in, with my African Yam adventure.  Said yam, was served, among other things, with a hearty elk stew.  Inspired by a stop on the Ivory Coast, during the Flying Rose's imaginary journey, and after the pirates have taken a ship, on which there are barrels of pepper.  The fallen ship would have likely had in their cargo various other spices as well, vegetables for their own use, and ivory for later sale or exchange.
Needless to say, I got a very large kick out of this novel.  There were many food notes I took, but after going ahead with the purchase of a big yam online, direct from Ghana, I just went with the oceanic flow.  I do love food experimentation, and trying new vegetables, fruits, herbs and spices.  The yam is delicious and very much like potato. 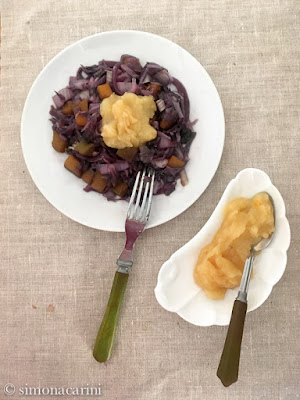 Next Simona, of Bricole fame, came aboard for the celebration with a delicately spiced dish of vegetables,  Red Napa cabbage and winter squash with applesauce,  Perfect!  And just what this party needed.
She noted that "The novel offered a change of time and scenery to my usual reading: I sailed on the Flying Rose, met the characters, followed their adventures and on Sundays I sat down with Captain Mabbott and Chef Wedgwood to savor his dishes and their conversation. As you can imagine from the premise, there was a fair amount of food in the book, some intriguing dishes, some less so, all providing to the reader a chance to think about the limitations of cooking on a ship that spends a lot of time sailing and does not have refrigeration on board." 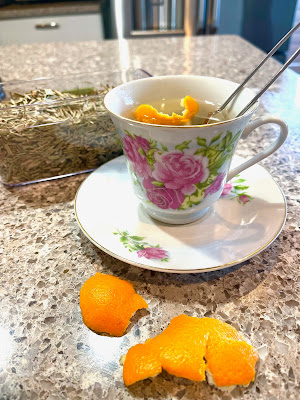 Terri, of Our Good Life, brought an inspired pot of tea, a comforting melange of herbs and spices,  to round things out at our pirate bash.  She said "My inspiration came from this passage:  “Sweet is the welcoming hand, the mother’s milk, the kiss, the warm bed. its color is the orange of dusk. Bitterness is the love behind a stern word, it is hard-earned fortitude. Its color is green. Astringency is a strong wind; it tightens and cleans, it invokes self-reliance. It is the blue of cold water.” p. 75
"I decided to brew up a tea based on some of the words above: orange, milk, bitterness, green, cold water. Do you see where this is going? Yes, I made tea from green tea, oranges, milk, sugar, and water. I also added a bit of lemongrass as well. It is a wonderful blend of flavors, perfect for fall." 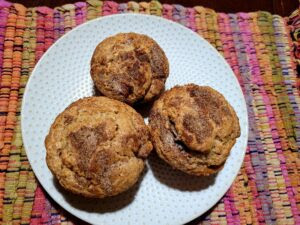 Debra of Eliot's Eats decided to contribute a quite yummy sounding recipe she calls Cinnamon and Gunpowder Muffins.  Unique and totally pertinent to the book, incorporating both apples and gunpowder green tea.
I imagine they would be a wonderful pick-me-up, the morning after our wild and crazy pirate ship party!  Especially if paired with Terri's herbal tera.  Debra got sidetracked and didn't finish reading in time, but says she "will post a true review of the book when I finish it.  I have picked it back up (after I realized it was due at the end of November) and I am enjoying it."
I do believe that's everyone.  Let me know if someone got missed!  Thank you all for participating with us, and joining the party after.
I  hope you will take part in our next Cook the Books adventure, which will be Midnight Chicken by Ella Risbridger.  This December/January selection, will be hosted by Debra of Eliot's Eats, and the deadline for contributing your post for that is Monday, January 31, 2022.
at 12:42 PM 3 comments: