Life from Scratch Round Up

It was a pleasure for me to host this round of Cook the Books with Life from Scratch  by Sasha Martin.  You see, Martin is a local writer (hailing out of Tulsa, Oklahoma), she's a food blogger (Global Table Adventures), and I got to personally meet her and write with her at a food writing symposium (Pen, Paper & Fork).   I was in awe.

I do have to say that it was difficult for me to forgive Martin's mother with all the life experiences she threw at her daughter, but after meeting the author and understanding her road to forgiveness and acceptance, I have a new appreciation for Life from Scratch. 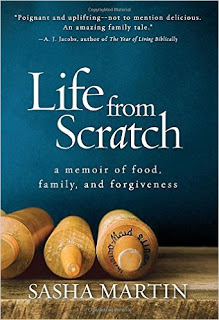 The reviews were mixed from the CTB membership with quite a few disliking the mother or expecting a food-blogger-adventure story.   Globally though, we all took inspiration and cooked from the following countries:  Argentina, Bulgaria, Denmark, France, Georgia (the country, not the US state), Italy, Sri Lanka, and Zambia.  There were two posts inspired from Martin's own roast chicken recipe as well.

Since Wendy from A Day in the Life on the Farm was the first to post up, I will start in reverse alphabetical order.  Here is Wendy's Ifisashi Zambian Peanut Stew. (Wendy took her recipe from  "a Lenten handout from CRS... and knew it was perfect for this memoir about cooking around the globe.") 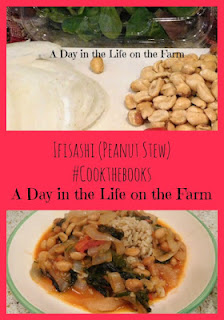 
I loved Sasha's story of the flawed mother that she loved unceasingly.  Of her struggles trying to adapt and accept her "new family". Of her tragic losses in life and finally of her discovering her self-worth with the assistance of a good man, the demands of motherhood and the solace of the kitchen.

CTB co-host, Deb from Kahakai Kitchen, got her post in under the wire.  I am so glad she was able to post up her delicious White Dal Curry from Sri Lanka.  (Deb found this recipe on Martin's blog.) 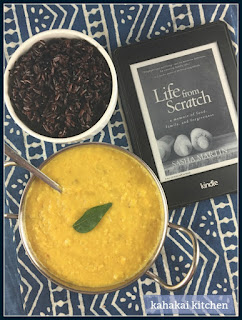 Deb mentions she had a hard time with the first half of the book because of the depressing subject matter.  "Martin's writing won me over in the end, and the later part of the book as she finds her place in the adult world and begins cooking her way through the recipes of the world was more enjoyable--even as she worked through her fear of abandonment and other issues of her childhood." 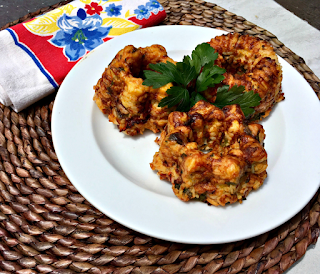 I love that Cathleen used mini bundt pans for her rice cakes.   She presents this dish by writing:


This is a simple dish prepared by the author’s mother and grandmother, both practical and economical as it uses readily available ingredients. Author Sasha said that she found the recipe for grandma's torta di riso, carefully penned in blue, green and purple ink.  Her mother's handwriting was neat, legible and determined.  It inspired her I think. 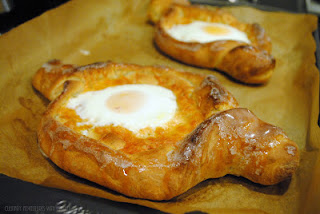 Camilla was also struck by the forgiveness theme and writes, " I think, for Sasha, forgiveness is more about acceptance."  She does recommend the book to others though.


There were times when the memoir was tough to read, difficult in its rawness. Sasha cracks open her life and the reader's heart is wrenched right along with hers. But it's also a wonderful story. I hope you'll read it.

Claudia, another CTB co-host from Honey from Rock, was a bit annoyed by the mother as well:  "one would have thought that a woman with 'Mom's' independence of mind, and spirited personality would have tucked her kids into their car, with all essentials and split for the West Coast or somewhere in between, rather than give up her precious children."  Claudia chose to focus on Martin's time in France and whipped up some Mango Crepes. 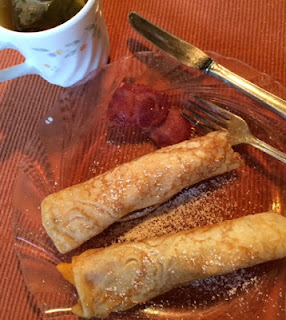 Despite her displeasure with Martin's mother, Claudia writes:


All that aside, and two thirds of the book in, we come to a point of, "Forgetting the past and looking forward to what lies ahead,"  I loved the whole concept of  her Global Table Adventures, cooking right through the countries of the world, alphabetically.    I would like to give that a try myself, maybe take the remainder of my life, certainly no rush if you're not planning a book from it.

Next up, let's travel to Denmark for (wait for it) Danish!  And, welcome to a new member with Reviews, Chews & How-tos.  Lynda creates a recipe from her own mother's archives:  Almond Pastries. 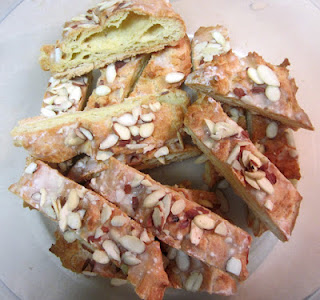 I thought Lynda was spot-on with her summation of this book:


At times, this memoir was very painful to read, but I appreciated  the ambivalence that didn't attempt to make her mother's choices sound better than they were, or to write her off as merely the villain of the story. Others in her life are also depicted fairly - the pain they caused is described, but through her words, those that might be offered compassion are granted it.

Bulgaria is our next stop with Evelyne at Cultureatz.  She made a batch of Kompot, a drink that is "common in most of the Central and Eastern European countries, as well Central Asia. And no, it has nothing to do with apple compote (a.k.a applesauce). In fact kompot is something you drink! It is a sweet beverage that can be served hot or cold." 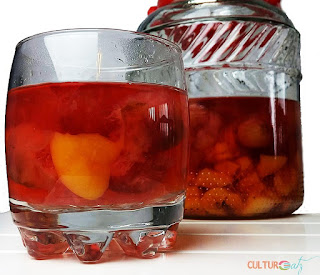 Evelyne was excited about this book and the international food blogging experience which is right up her alley.  She points out, however, that "the writing process of the author took her down a very emotional path resulting from her less the typical family nucleus upbringing. But honestly the book was way more about her therapeutic process then about recipes from around the world. As a matter of fact only 13% of the book is really dedicated to her world cooking blog project. "

A good roast chicken recipe is evident in most cultures and Amy's Cooking Adventures recreated Orange and Herbed Roasted Chicken, a dish that Martin makes for her future husband. 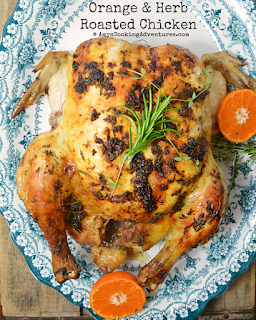 Amy concisely and perfectly sums up the book's theme:

Her past eventually brought her on a mission to cook across the world from a-z and chronicle her adventures on her blog.  It’s an amazing story of perseverance in many ways, from overcoming the struggles of her childhood to the huge cooking a-z project she undertook (with an infant, no less!)

Fellow CTB co-host, Simona from briciole, was also inspired by Martin's roast chicken recipe.  She whipped up her take on the recipe (using herbs from her own garden and Meyer lemons instead of oranges) and then combined the chicken with fresh asparagus to create Roasted Chicken, Asparagus and Avocado Salad. 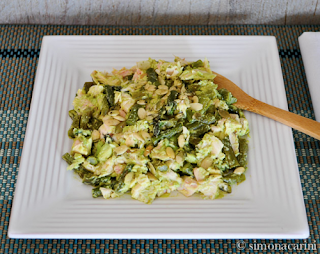 Although the writing didn't shine for Simona, I am glad she treated us to this inspired salad.


The recipe I am sharing is the result of a combination of events: I had leftovers asparagus, besides leftovers from the roast chicken described above and I was by myself. The result was so good that I made the salad again the following day, grateful that the chicken had been large enough to provide me leftovers for another salad.

Of course, even as the host of this round, I was almost the absolute last to post.   Since we are still on our healthy eating kick, I went with a salad-like dish, an Argentinian recipe from the book.  Martin based her recipe on Chef Francis Mallmann's.  Here is my take on Roasted Acorn Squash Salad with Arugla and Chèvre. 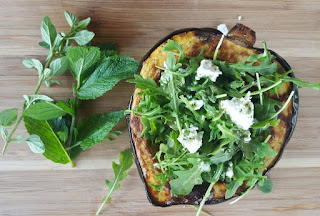 Martin had me on the first page with her T.S. Eliot quote from "The Little Gidding,"  Since forgiveness was the connection for most of us (or the lack of forgiveness), I will end this round with another bit of Eliot wisdom.


After such knowledge, what forgiveness? ("Gerontion"---T.S.Eliot)


Thanks for everyone who participated and thank you for the globally inspired recipes.

Cook the Books will complete this grouping of books with yet another memoir.  Simona at briciole is hosting the June/July selection, Mastering the Art of Soviet Cooking: A Memoir of Food and Longing by Anya Von Bremzen.

Despite our mixed feelings, I love the dishes we posted! Thanks for hosting.

So great to see various opinions...and so many awesome recipes!

Thanks for hosting a great round-up, and interesting book selection.

I agree with all the previous comments. Thank you so much Debra for hosting and for the round-up!

I totally blew it on this one. I read the book but forgot to write down the due date. I loved the book, so many emotions all the way through the reading. I, too, lost my brother, at a much younger age, but still so devastating.

Thanks to everyone who participated. I thought the dishes were truly inspired. (Sorry, we missed you this round, Terri. I would love to hear your thoughts on the book, though.)

Great round up! Thanks for hosting!

Thanks for the book pick Debra and for hosting a great round! I am late getting around to everyone but I am excited to read all of the posts. ;-) 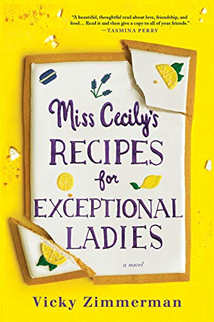