Hello everyone!
I am Jo from Food Junkie, this term’s host of Cook the Books, and it is time for all of you to meet our contestants, who read and cooked from Peter Mayle’s French Lessons.
I was sure that the book would inspire some mouth watering dishes with an inclination towards cream and cheese, and I was very excited to see the results. I was also intrigued by the fact that the book was not so popular with all of the contestants, some found it mediocre while others completely uninteresting, but I admired their frankness and I think that this is more important than keeping everyone happy all the time. After all we all have very different tastes in food, so why not in literature too?
Ok, so here is a list of all participants with a small description of their dish. Our judge  will be Beth from Beth Fish Reads, who maintains a very thorough literature blog and is a passionate foodie too! 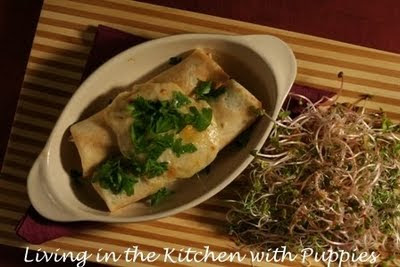 Natashya of Living in the Kitchen with Puppies was inspired by the chapter on the “Thigh Tasters of Vittel” and especially the early morning wine pairings that Mayle describes in the book. So she made Crepes aux Epinards et Fromage (Spinach and Cheese crepes) for breakfast and had them with some red wine. A very decadent way to start the day for sure! 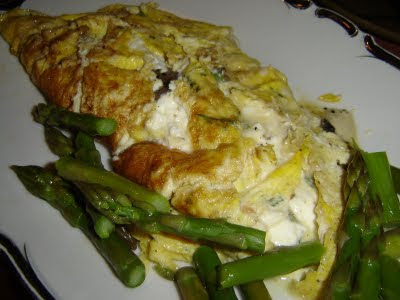 Claudia of Honey from Rock moderately liked the book, but was inspired enough by the three-Michelin Star restaurant descriptions of the last chapter when Mayele enjoys a spa and gastronomic weekend at Eugenie-les bains spa. So she set out to make Omelette aux Truffes, a rather extravagant dish because of the use of the expensive fungus, but admittedly one of the best ways to showcase the aroma and texture of good truffle. Unfortunately she couldn’t find any fresh ones and the preserved one she used didn’t have a very strong taste. However, this plump omelette surely looks inviting enough! 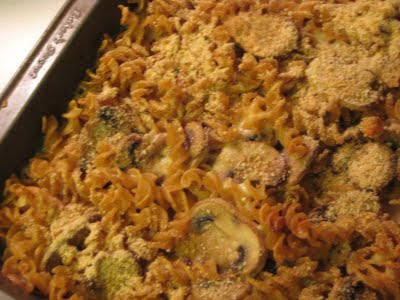 Joanne of Eats well with others also didn’t like the book that much, but she did enjoy the chapter on the Marathon du Medoc. I actually agree with her that it was one of the best chapters in the book. Being a runner herself she was amazed by the heavy meal the runners had the day before the race, but since she wasn’t going to run any time soon, she made Macaronis et Fromage Avec Des Champignons (Macaroni and Cheese with Gruyere and Mushrooms) a “play on the macaroni and cheese we all know and love. I don’t know about you, but I think this is perfect comfort food! 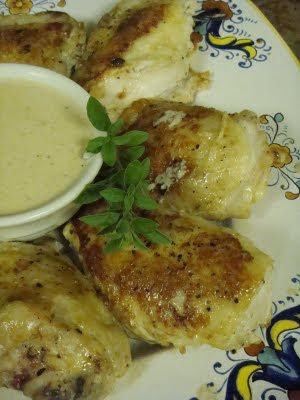 Beth of Seventh Level of boredom really enjoyed the book, despite the fact that at first it struck her “as an arrogant account of one man’s travels through France on a no-holds-barred mission to eat and get drunk, with a seemingly limitless line of credit”.  She actually found the meal that Mayle had in Bresse very inspiring, so she cooked the kind of dish I always associate with French bistro cooking,  Poulet a la creme (chicken with cream). She suggests you eat this the minute you make it and I couldn’t agree more! 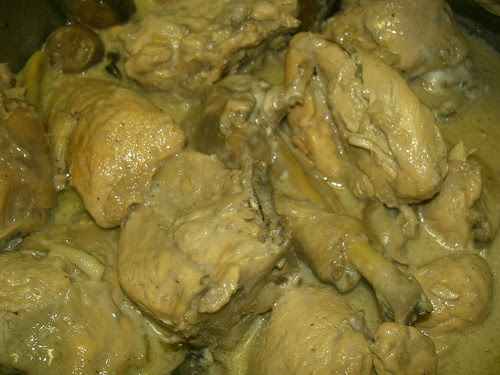 Maria of Organically Cooked liked the book and found that the French have many similarities with the Greeks living in Crete. She notices that “they both love smoking and find it frigging hard to obey the recently introduced smoking bans in their countries. Then they both love their long extended lunches and siestas. They both also take pride in their institutions, which may sound a little old-fashioned in some ways, as if they have not moved on with the times, but hey, that’s the Greeks (or the French) for you”. I would also add that they both take great pride in their cuisine. Anyway, Maria left her Mediterranean diet aside for a while and made Chicken with creme and mushrooms, also inspired by Mayle’s meal in Bresse. She tried to get hold of an excellent quality chicken and to make do with ingredients that were available in her part of the world and from what I see the results were excellent! 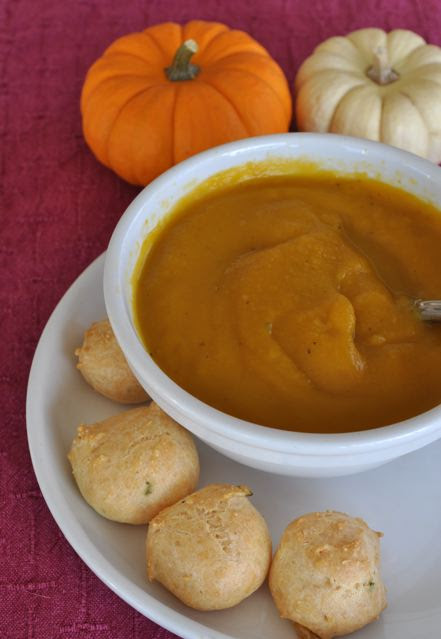 Simona from Briciole , an Italian-English blog, was inspired by the chapter dedicated to the wine auction in Burgundy. Although she doesn’t like wine that much, she was intrigued by the puff pastry nuggets Mayle tried together there, so she made Gougères a la Gouda. And guess what, the Gouda she used she made herself too! Now HOW COOL IS THAT!?

Judy of Judy’s Gross Eats liked the book and particularly the chapter on the Marathon du Medoc. So she cooked up not one but two dishes: a gratin Savoyarde and Porc a la Normandie. Unfortunately she doesn’t give us any of these recipes! 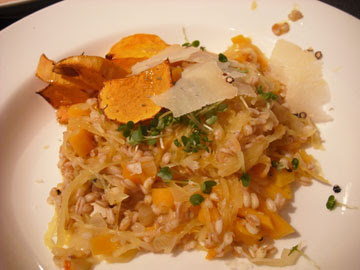 Alicia of Foodycat didn’t like the book that much and wasn’t moved to either taste any of the food described in there or visit any of the food festivals. Inspiration for cooking up something French-related only came while watching Eating in the Sun on BBC television and their visit to Alain Ducasse’s restaurant La Bastide de Moustiers.  So she cooked up a squash and truffle spelt risotto which would tie in nicely with the whole chapter on truffles that Mayle had in the book. The final result was not as good as expected truffle-wise, because, like Claudia (of Honey from Rock) she didn’t use any fresh truffles, only jarred ones (I have now decided never to buy anything but the real thing). Other than that, however, it was a yummy dish and I certainly believe her! 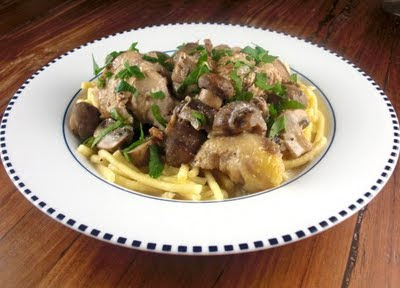 Deb of Kahakai Kitchen, co-founder of Cook the Books Club, liked the book and since she had a hard time finding something entirely related to the book to cook she decided to stick to something French instead, so she made Coq au Riesling. This is a traditional an Alsatian variation of the more well-known Coq au vin, where the red Burgundian wine is substituted by the white fruity Riesling wine which is abundant in the area. She actually prefers it to Coq auVin and I couldn’t agree more! 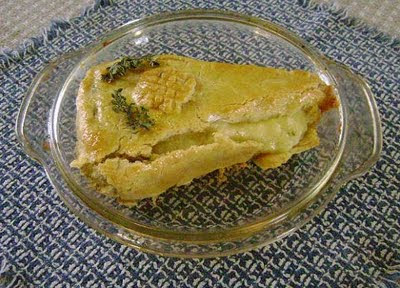 Last but not least the Rachel of The Crispy Cook, also a Cook the Books co-founder, really loved the book and  was inspired to visit some food festivals in her area (Bennington’s Garlic Festival and the Washington County Cheese Tour)! Rachel loves cheese so she decided to make a pastry wrapped Brie, which sounds like an easy thing to do but isn’t if you are making it gluten free (her blog specializes in wheat and gluten free recipes). 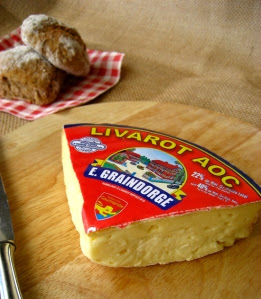 Finally,  my own entry for Cook the Books, which, compared to all the lovely food presented above is going to be very boring indeed, was a wedge of Livarot cheese inspired of course by the chapter “Love at first sniff” which describes Mayle’s visit to the village of Livarot for a cheese festival. I was actually so surprised and excited to be able to find this cheese in Greece, that I didn’t think twice about cooking up anything. Plus, since I am the host, I am not being judged!

That was it folks! I hope we will see all of you for our next November-January Cook the Books event where Rachel, The Crispy Cook will be hosting. She will take us on an adventure around the globe with her pick the foodie/travel memoir, “A Taste for Adventure: A Culinary Odyssey Around the World“ by Anik See.
Till then au revoir!
at 12:06 PM