The last round of Cook the Books found us in a memoir-palooza (Stir, Dinner with Edward, Life from Scratch and Mastering the Art of Soviet Cooking).

This round has us going back in time a bit and incorporating a few history lessons perhaps along the way.  Our next four selections include a novel set in the time of Cortés in The New World, a cherished remembrance from Laura Ingalls Wilder, and a historical novel of ancient Rome. We've thrown in a mystery set in the French countryside for good measure.

Deb (Kahakai Kitchen) is sparking a lot of memories for some of us, I'm sure, with her pick of Farmer Boy by Laura Ingalls Wilder.  The Little House on the Prairie books by Laura Ingalls Wilder have been read and beloved by children and adults for decades. Published from 1932 to 1943, the nine Little House books were based on the author’s life growing up as a pioneer from childhood through adulthood and they spawned the popular television series that ran from the mid 70s through the early 80s. 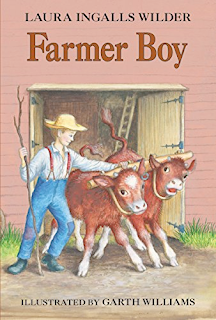 Farmer Boy is the second book of the series and was published in 1933. It’s the story of Laura’s husband Almanzo Wilder, who grew up on a farm in upstate New York, far from the little house Laura grew up in. I was inspired to pick it for my round because of an online discussion of foodie books where someone mentioned how much food was in it. I didn’t remember the food being so prominent, so I decided to read it again and thought it would be great to do it in the company of my Cook the Books friends. Since Cook the Books began in the fall of 2008, we have only read two children’s books--The Little White Horse in 2009 and Charlie and the Chocolate Factory in 2012, so I think it’s time to go back to our childhoods for this classic book.

Whether you are reading Farmer Boy for the first time, or revisiting it with your foodie goggles on, I hope you join us for a fun round.

Deadline for this selection is Saturday, September 30, 2017.

Claudia's (Honey from Rock) pick for October/November is The Patriarch by Martin Walker. Martin Walker has written an engaging series of mysteries set in the Dordogne region of France, into which he manages to fold political and social issues, with romance, fine wines from the area and enticing food, all are international best-sellers.  I have been enjoying his books for a few years now, and wanted to share at least one with Cook the Books, for all the fabulous food and wine included. 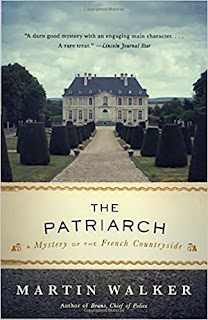 The Patriarch is one of his best and a more recent addition to the oeuvre. Benoit Courreges, known popularly as Bruno, is Walker's charming protagonist.  Chief of Police in the small French town of St. Denis, he is a true Renaissance man, gourmet cook, wine enthusiast, gardener, including his orchard of truffle oaks, a hunter and forager, able to produce his own jams, confits, pâté, sausages, ham, etc.  All that and solve the area's crime, settle domestic disputes, ride his horse with lovely ladies and more.  What a guy! I find him quite inspiring.

In this novel, Marco Desaix is known as "The Patriarch", an iconic hero of the French Resistance, fulfills a boyhood dream of Bruno's, inviting him to a lavish birthday celebration being held in his honor.  Of course there is a murder connected with the event, which has political overtones, intrigue, mysterious parentage and inheritances.  Then there is the animal rights activism going on, with outraged hunters and pâté producers.  Politics on a local French level.

Debra (Eliot's Eats) chose The Feast of Sorrow by Crystal King for December/January.  Set in ancient Rome, the plot revolves around Thrasius, a slave that is coveted by many masters because of his culinary prowess.   This is a tale of intrigue, power, and obsession as Thrasius' master, Apicius, is determined to become the culinary adviser for Caesar.   He sees his new slave as the key to his success.   (Apicius is a historical figure that lived during the First Century AD.  He was known as a gourmand and epicurean.) 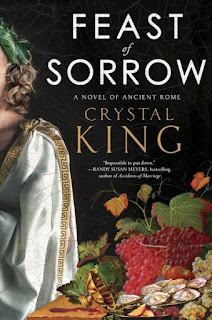 I read the first two chapters as a sample on my Kindle and was hooked.  I ordered the entire book right away.  For an interesting discussion of this book and ancient Rome, you might want to listen to "What Did Ancient Romans Eat? New Novel Serves Up Meals and Intrigue" (The Salt, April 28, 2017).

Simona (bricriole) is hosting The Discovery of Chocolate by James Runcie.  Fans of the fascinating Sidney Chambers know Runcie as the author of six volumes of stories featuring the Vicar of Grantchester (who then becomes Archdeacon). The Discovery of Chocolate (2001) is the first novel published by the British author, who started his career as screenwriter, director and producer. 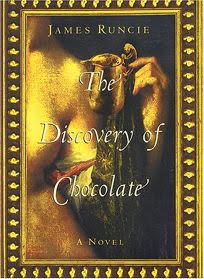 In this historical novel, love sets young Diego on a journey to the New World with the conquistador Cortés. In Mexico, Diego discovers the delights of chocolate, which was then a beverage. Drinking chocolate has a "funny" effect on Diego, which allows the novel to span not only continents but also centuries.

On his website, the author says a few words about the novel's genesis:

I had originally planned to write a series of short stories, one for each century, connected by chocolate but with different characters and different moments in time. But then I thought that they might be able to have the same narrator, a character who travelled through history, and across all the stories...

So these became my basic ingredients. Life and death, love and chocolate.

If this morsel tempts you, grab your favorite chocolate bar or truffle and join us for this edition of our virtual book club, which will span the months of February and March 2018.

Remember that membership is open to anyone and we hope you join us by reading these selections and creating inspired recipes.  For more information about participating, click here.

October/November:  The Patriarch by Martin Walker (hosted by Claudia at Honey from Rock)

December/January:  The Feast of Sorrow by Crystal King (hosted by Debra at Eliot's Eats)

February/March:  The Discovery of Chocolate by James Runcie (hosted by Simona at bricriole)

I haven't had a chance to play along in AGES but I cannot miss Farmer Boy. The food in that book (and the abundance, in contrast with the austerity and poverty of LIW's own reminiscences) is so memorable.

I'm so excited. All four are ordered to my nook or my audible account. Can't wait to get started on them.

Wow, talk about traveling around the world and across the ages! I hadn't realized just how wide the span is until I saw the selections presented together.
Thank you Debra for a great introduction to the upcoming readings.