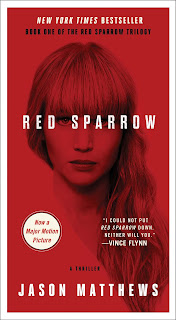 Have you ever heard of a spy novel with recipes? I had not until I read the description of Red Sparrow (the first volume in a trilogy) written by a former officer of the CIA’s Operations Directorate.
From the Publisher:

In contemporary Russia, state intelligence officer Dominika Egorova has been drafted to become a “Sparrow”—a spy trained in the art of seduction to elicit information from their marks. She’s been assigned to Nathaniel Nash, a CIA officer who handles the organization’s most sensitive penetration of Russian intelligence.

The two young intelligence officers, trained in their respective spy schools, collide in a charged atmosphere of tradecraft, deception and, inevitably, a forbidden spiral of physical attraction that threatens their careers and the security of America’s valuable mole in Moscow.

The combination of espionage thriller and recipe was too intriguing to pass. You can get a taste of it in the Excerpt available on the publisher's website
From the review in the New York Times:

As you might expect, the author also possesses an extraordinarily deep knowledge of his subject. I have rarely encountered a nonfiction title, much less a novel, so rich in what would once have been regarded as classified information. From dead drops to honey traps, trunk escapes to burst transmissions, Matthews offers the reader a primer in 21st-century spying. His former foes in Moscow will be choking on their blinis when they read how much has been revealed about their trade­craft. The author’s unrelentingly bleak depiction of the post-Soviet espiocracy also rings depressingly true.

There is also a movie with the same title, released in 2018

I am looking forward to reading this book and being inspired by it in the kitchen with all of you.

Leave a comment below with a link to your post or email me at simosite AT mac DOT com.
Remember that anyone can participate in Cook the Books: simply pick up a copy of the selection from your local bookstore or library, take inspiration from said reading, cook and post the inspired dish. We look forward to having you read and cook along with us in this selection period and beyond. New participants are always welcome. (Leave a comment here or check out our Guidelines page if you have any questions.)
Simona, briciole

I found a copy of the book. This will be my first spy novel.

Thank you Debra and Deb. I'm also excited and this is the first spy novel I read. I hope you'll enjoy it. I started it and am learning the acronyms :)

Simona, I will send you an email with a photo. I posted today.

Thank you, Tina and Debra :)

Thanks for hosting Simona. My post is up: http://honeyfromrock.blogspot.com/2022/03/red-sparrow-and-ukrainian-dish-in.html

And here's my contribution :)
https://www.pulcetta.com/2022/03/recipe-red-beet-carrot-apple-egg-salad.html

It's still the 31st here! ;-) Sorry for my late entry. Thank you for hosting Simona.
http://kahakaikitchen.blogspot.com/2022/03/soubise-onion-and-rice-casserole-for.html

No worries, Deb: thank you for your contribution :)