It's time to roundup all the happy hippie-ish dishes our participants made for our Cook the Books May/June pick, Hippie Food: How Back-to-the-Landers, Longhairs, and Revolutionaries Changed the Way We Eat. Yes, there was a lot of brown rice involved but there was also bread and veggies and a yummy apple crisp! ;-) 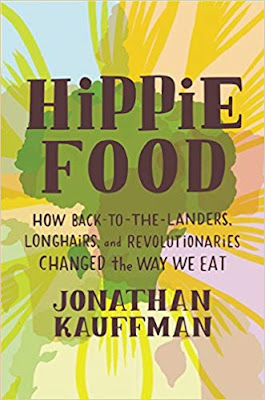 Wendy from A Day in the Life On the Farm was first in, finding the book timely, saying "I thought it was quite coincidental that this book was chosen to be read during this time in our history. The book is all about the Hippie Movement of the 60's and 70's when they were flocking to communes and trying to live off the land with what they had on hand and with very little money."

Wendy made White Whole Wheat Tassajera Bread saying, "One of the things that "Hippie Food" brought to us was the awareness of the natural goodness and health benefits of whole grains. Tassajara Bread starts with whole wheat flour. There are recipes that also add in additional seeds and grains but I did not add anything to my version that I started with a bag of white whole wheat flour that I had in my pantry." 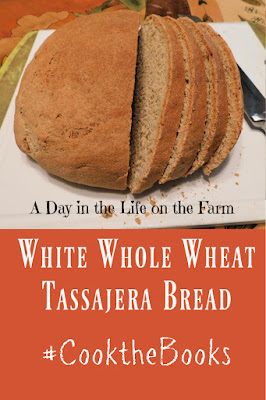 Camilla of Culinary Adventures with Camilla was right behind Wendy with her entry. She said, "On one hand, I loved this book as food history. On the other hand, it's not about hippie food; it's just food you should eat once you learn about the merits of a less-processed diet. Then, again, the boys' friends do call me a 'hippie food witch. So, maybe it is hippie food and I'm just a hippie."

Camilla tried her hand at sourdough saying, "… a friend gifted me some of her sourdough starter. And with time on my hands as we all shelter in place to help flatten the curve of the coronavirus, I was inspired to give sourdough bread baking a try. After more than a half dozen sourdough bricks, I finally moved to weight measurements versus volume. Plus I started using the Tartine Bakery method of folding versus kneading. Those two adjustments made a world of difference and I finally started to enjoy the bread I was baking. This Boule with Fresh Garlic, Fresh Rosemary and Pitted Green Olives was my twelfth loaf and - by far - my favorite! So, I'm sharing it today to go with Hippie Food." 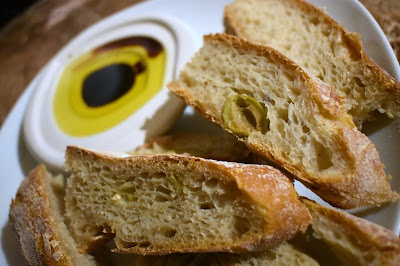 Next was Claudia of Honey from Rock who related to parts of the book before it got too historical in areas, saying, "I lived this darn book, some of it anyway. Caught up in the world directly around us as we were, much of what Kauffman recorded was part of the "Mainland" story or only hearsay. We were hippies, Bob and I, of a sort, back-to-the-landers (if you can go back to where you never were in the first place) in rural Hawaii. Building a basic, simple home, planting trees, a garden and etc."

Claudia settled on a vegetarian dish, Golobki--Barley and Mushroom-Stuffed Cabbage Rolls. She said, "Thus, when he  mentioned a particular vegetarian restaurant serving Barley and Mushroom Spinach Rolls, that's what I hit on. Who knows where in the book it was?  My Kindle died, just when I'd finished reading it, so now it's not available to go back and check. Until next week when my new one arrives. All things being equal. I usually make my spinach rolls with a meat filling, so this is an homage to Kauffman's version of hippie food - vegetarian." 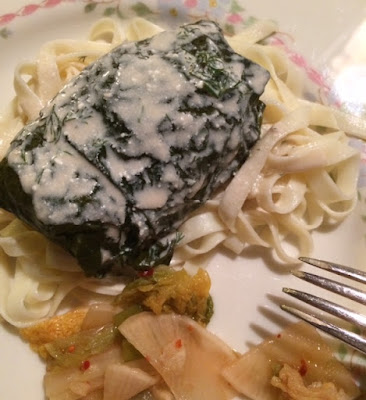 Cathy of Delaware Girl Eats says, "I’ll bet you didn’t know that granola was invented way back in the 1950’s by noted nutritionist Adele Davis or that it was considered “hippie food” until it went mainstream in the 1990’s. I didn’t until reading the book Hippie Food and then researching the topic. Davis was dubbed “the high priestess of nutrition” in her heyday and was at the forefront of the health food movement. She remained a groundbreaking influence on healthy eating until her death in 1974, compiling several famous books on vitamins and healthy eating including “Let’s Eat Right to Keep Fit and Let’s Cook it Right.” Author Jonathan Kauffman singes her praises in his book “Hippie Food“ which is the selection this cycle in our Cook the Books reading/cooking group."

Cathy put that granola to good use saying, "For my dish inspired by the book selection I chose to use granola to liven up a traditional recipe for Apple Crumble. This long-standing favorite is a dish that works equally well for breakfast with coffee as it does to end the dinner meal as dessert.It’s that flexible." 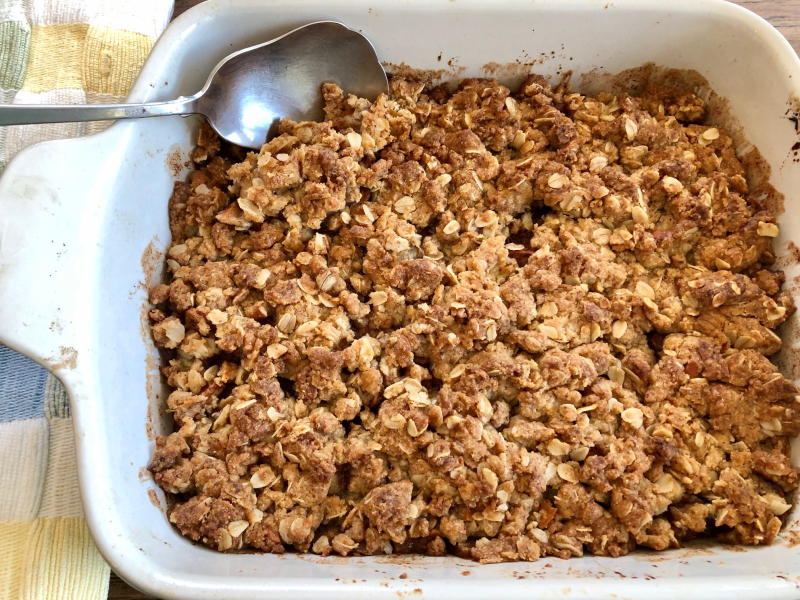 Can I just say “I had no idea”? I guess I have always been aware that the 60s and 70s had influenced the way we eat, especially where health food is concerned. This book goes way beyond the hippie movement and starts all the way back in the early 20th century with those finding the health benefits of raw food. Hippie Food is not however about hippies exclusively. While all the health food movements during the last century seemed to be led by colorful characters, the gamut of leaders run from Zen masters to surfers to Seventh-Day Adventists to homesteaders."

For her dish Debra says, "From chapter two, “Brown Rice and the Macrobiotic Pioneers,” I knew that the dish I would present for this post would feature brown rice. The final paragraphs of the book reinforced this decision. The foods that the hippies, back-to-landers, longhairs and revolutionaries promoted and championed are now mainstream. These once foreign and strange ingredients are now in our pantries. “They slip into the meals we throw together after a long workday” (287). That is the scenario that led to this dish: Roasted Broccoli Brown Rice Bowls." 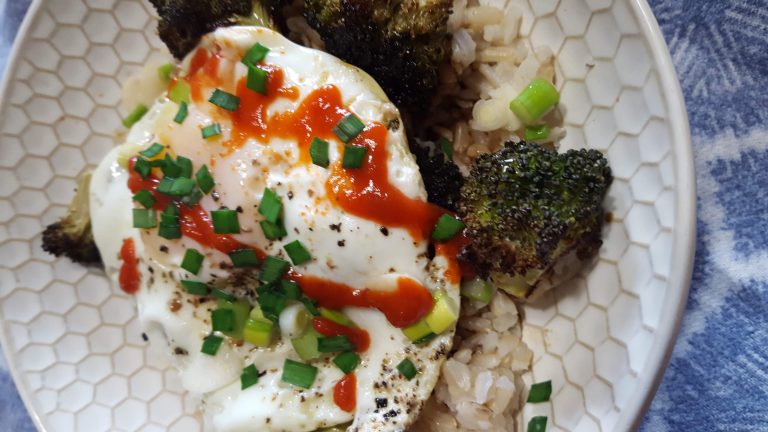 Simona of briciole said, "Although I have lived in California for 25 years, I spent my childhood and early adulthood in Italy, so I don't have firsthand experience of the events described in the book that predate my move. The situation in Italy was different from that in the US. For example, Italians have always been serious about their bread, buying it fresh almost daily from a neighborhood bakery. I have never experienced the "plastic bread" described in the book. I do remember, however, when whole-wheat bread (pane integrale) became more readily available, as the health benefits of whole grains became better known."

For her Carrot, Radish and Turnip Salad with Microgreens, Simona took inspiration from sprouts and farmers markets, saying, "I buy carrots, radishes and salad turnips by the bunch, then, once I get home, I cut off the greens from all of them and use those in other dishes. I admit I am still learning to appreciate carrot tops: they have a rather strong grassy flavor that I must dilute with other greens. ... One great characteristic of carrots, radishes and salad turnips is that they last a few days, unlike their greens, which wilt fairly quickly. This is particularly important for me as I am the only root vegetable eater in the household, which explains why the recipe is for one. Of course, it can be easily multiplied to nourish all the people around your table." 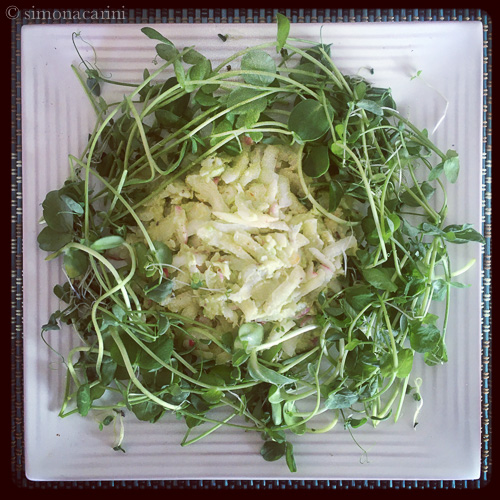 Amy of Amy's Cooking Adventures found the book to be a bit too much, saying "As I started reading, there were certainly some interesting tidbits, but between those tidbits, it was a slog, almost like reading a textbook. I got about halfway through the brown rice chapter when I started skimming. I read most of the brown bread chapter (as a bread baker, I thoroughly enjoyed that chapter. And after that I just lost interest. One of the most interesting things I noted as I read was that the trend of hippie food started as a pursuit for optimal health and longevity...while on copious amounts of illicit drugs. Kinda mind boggling."

Amy found that dichotomy inspiration for her unique rice dish, Arroz con Coca-Cola (Brown Rice With Coca-Cola), saying "As luck would have it, right as I decided to be finished skimming the rest of the book, I came across a brown rice recipe as I was researching for a different blog event. The fascinating part of this recipe that made me unable to turn away was the fact that the rice was cooked in coke!  I thought it was perfect for hippie food.  It reminded me of the conundrum of eating whole grains to be healthy paired with other very unhealthy aspects of their lives. The pairing of brown rice and coke, I thought, illustrated this perfectly." 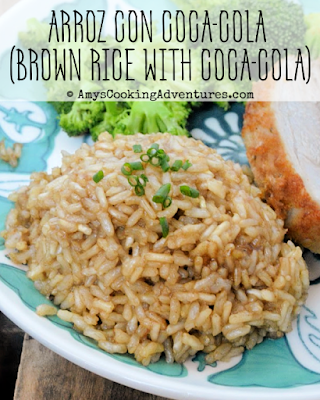 It's lovely to have Terri of Our Good Life back with us for this round. Terri found the book interesting, saying "I think Mr. Kaufman did wonderful work covering the history of the food culture. New to me was the "hippie trail" which is now something I would love to do! In all this book continues to show the idealism this generation brought to the world. Thank goodness, as we all may be eating food that looks and tastes like cardboard more than we do now."

She found easy inspiration for her dish saying, "My inspirational dish is Brown Rice and Raw Veggies Salad. With the spices I chose, it is a nod to the Hippie Trail!  This dish uses leftover brown rice and raw veggies with good oil and delicious spices. It is a great side dish for grilled pork steak (I'm a Missouri girl, loves her pork steak!) or as an awesome vegan meal." 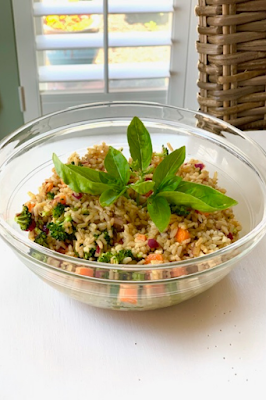 And finally, at Kahakai Kitchen although it took me awhile to make it through because of competing review reads and life, I geeked out a little over this book and really enjoyed it. I think much of that came from how much Kauffman hit on some of my favorite classic vegetarian cookbooks, chefs and food icons.

For my bookish dish I picked a very hippie-ish Spinach-Brown Rice Casserole from the New Moosewood Cookbook by Mollie Katzen. With sunflower seeds, eggs and cheese, and spices it was a tasty bit of nostalgia. 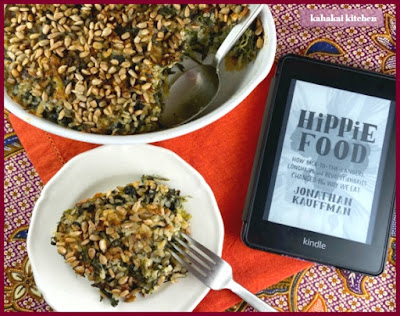 Mahalo to everyone who joined in this edition of Cook the Books! I enjoyed reading your posts and drooling over your healthy and inspired dishes!

I think I managed to include everyone in roundup--at least all of the entries I recieved on the blog and by email but if I missed anyone or goofed somewhere along the way, please let me know.


And now, I’m turning things over to Claudia of Honey From Rock who is hosting our June/July edition. We will be reading Kitchen Chinese by Ann Mah.

Thanks for hosting this informative read! I love seeing the gamut of dishes here. Checking those out that I missed. (Can I just say that if we gave a prize for the best inspired dishes, Amy might win this one!) :)

Fun fun fun! I missed you all! Looking forward to the next book!!

Thanks for hosting Deb.

Thanks! I had fun with this one! And yes, that Coca-Cola rice is so unique and very inspired!

There is indeed quite a bit of brown rice on the table this time ;) Lovely spread, as always. Thank you Deb for hosting and for the roundup :)

How fun! What a great choice of a book, too.